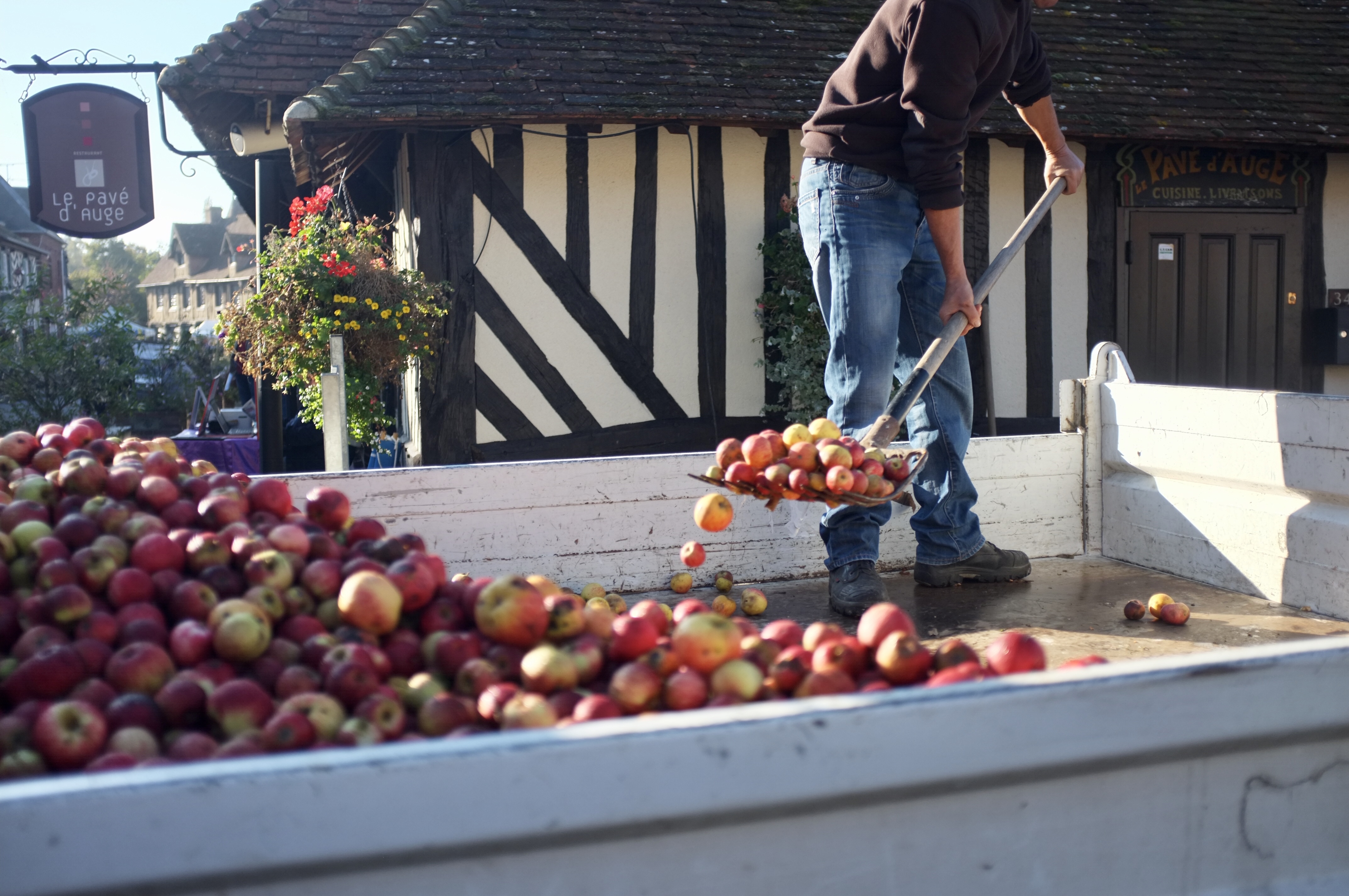 An October visit to the pear and apple orchards of Normandy is the perfect way to learn about Cidre and Poiré.

On a trip to Normandy last autumn, I learned about the French versions of cider (Cidre) and perry (Poiré) first-hand from the makers.

My first stop was Jerome Forget at the Ferme de l’Yonniere in the Domfrontais county, who embarked on his quest for the best possible Poiré some twenty years ago.

Welcoming us with a beaming smile, you can feel the passion as soon as he talks about his products. “My family have been here for generations. We originally were an agricultural farm – and we still are – just that I was seized by the love of Poiré.” Leading us through his orchards, he explains that their whole culture relies on natural processes.

“Nothing much has changed for centuries – the cows clean the orchards by eating grass and plants, then when the fruits are ripe and falls on the ground, we simply collect them.” Obviously, they move the cows on to pasture before they can eat the pears…

I took the opportunity to ask what so special about the Norman cows. “Not only are they good for milk, but they’re also good for meat, which is unusual.”

Jerome then showed us the machines that are used to crush the apples, then the huge press to extract all the juices. We make our way to the hangar where enormous, shiny chromed tanks hold the precious nectar. Each of the three tanks are at different levels of fermentation. Asked if it’s the same process used in the UK, he points out at the differences. “In the UK, you’re allowed to use only 35% of the fruit’s juice to have the right to call it Perry. It means most English producers makes a quick and basic fermentation, and then add water, sugar and artificial yeast. In France, nothing of that is allowed, it has to be 100% fruit juice, therefore we can work only with the fruit and its natural yeast to achieve the final product, or we can’t call it Poiré. The same drastic rule applies to Cidre so that leaves us with no other choice than to use a slow fermentation over six months.”

When asked if it’s not difficult to compete with such different rules he can’t help but smile, “It’s just a totally different product. Down at the pub, you can drink several pints of English Perry in just a few hours. Try that with Poiré!” He laughed. He’s right: I wouldn’t dare! “Poiré is more like Champagne; actually we use very similar techniques, but, due to the fruit itself, we can’t achieve the same levels of alcohol.”

Jerome had us try his Poiré at different levels of fermentation: what starts as basically pear juice got gradually stronger. “But it won’t be sparkling before we bottle it. This is at this stage that the bubble forms,” We then went on to sample some of his bottles. And if I say bottles, it’s because Jerome has developed a range of Perry: cloudy, clear and a special “cuvée” that had been left to mature longer.

He explained that, even if the basic is made with a type of pear called BlancPlant, he then goes on to add up to 12 other varieties of pears. “I always start with the same basic pear but the others gives me the opportunity to balance the tastes, like winemakers do with different types of grapes”. And it’s true that French wines are rarely made out of a single variety, and producers use this alchemy in order to achieve what they consider the best possible result.

Moving on from Poiré to Cidre, We found ourselves at the Ferme de Billy. Our hosts, the Vaucrecy brothers are as dedicated to the quality of their product as Jerome is. We found a completely different setting though: as much as the Ferme de l’Yonniere was very traditional, Billy is definitely looking towards the future. As Olivier puts it: “Cidre and Poiré are suffering from a very traditional and regional image, we’re just looking at giving it a new image”.

Visiting their farm, it’s obvious that the influence of the two brothers is trendy – to say the least. After wandering in the orchards, you find yourself in a deconsecrated chapel that they use as a modern art gallery from time to time. And leading us to their restaurant, we discover a decor tastefully mixing a New York loft atmosphere with farm and rustic furniture that the brothers created themselves. Every weekend guests can experience their own take on the brunch – obviously with a French twist – and where their products are highlighted. And they’ve gained such a reputation that you have to book up to three weeks in advance. Unfortunately, we arrived late on the Sunday afternoon, so we just had a few nibbles, but – gosh! – they were good..Going back to the Cidre itself, Olivier is adamant that it’s all down to the image and the way to market it. “We’ve recently seen the emergence of a new trend that was led by a label which found new markets, from top chefs to new cocktail recipes”. He then smiles: “They are very good at marketing, and we’re surfing the wave. When it finally comes down to the quality of the product, we’re pretty sure we’re on to a winner!” When asked if the name of Billy is somewhat an attempt on marketing as well, Olivier laughs: “No, no! The farm was founded in the 16th century by Jacques De Billy…it’s a very Norman name, nothing to do with Billy the Kid!”

As the evening unfolded, we sampled their products, and I should say they’re all delicious. Apart from different “cuvées” of Cidre, they also produce a whole range of Calvados and an – unfortunately – obscure by-product: “Pommeau” which is an elaborate mix of apple juice and Calvados. The result is aperitif heaven, around 14% alcohol, combining fruity and floral touches with the obvious Calvados kick. Lethal!