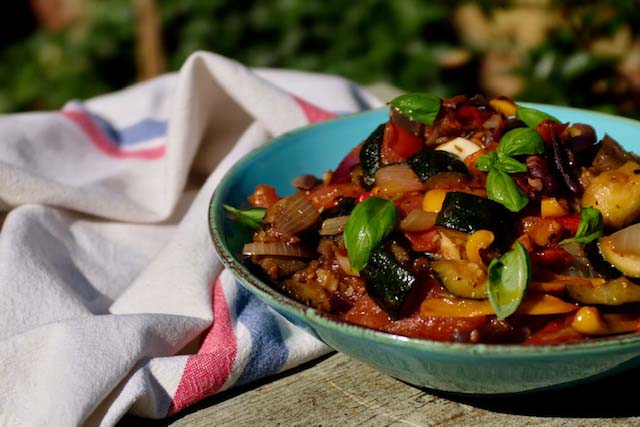 This simple-but-delicious vegetable dish from the sunny south of France is a star in its own right, but it’s also wonderful as a side dish.

Okay, I admit Ratatouille is not exactly rocket science to make, but still… there are so many ways to get it wrong.

Of course, there are trends. In the 1970s, my mum used to cut the veg into big chunks, and then cook them very gently for hours, resulting in soft veg. Nowadays, it seems it’s all cut a lot smaller, and cooked A LOT more quickly to keep some bite to the vegetables. I’ll be very honest with you, I’m somewhere in between those extremes. Personally, I’ll keep the cutting to a reasonable size, and the cooking time to keep some bite, without having those veggies almost raw.

So, apart from the trends, what else can go wrong with such a simple recipe, I hear you say. Almost everything, actually. First and foremost, the ingredients. The simpler the recipe, the more careful you have to be choosing your ingredients, as they’re not going to be drenched in ladles of gravy or other sauces.

Secondly, the cooking method: it is definitely NOT a one-pot wonder, and it’s cooked on the stove. Each vegetable is cooked separately and combined at the end – a method that takes in account the different cooking times of each ingredient, and also allows each one to retain its distinct flavour.

Oh yes, I was to forget about that absolute nightmare of our time: that need for everything to be ‘pretty’. There’s no such thing as a ‘pretty’ Ratatouille. Don’t take my word for it, so just Google the word, and you’ll find some photos of perfectly sliced vegetables, arranged in a colourful merry-go-round…but that’s not a Ratatouille, that is a ‘Tian’. And, if it looks like a Michelin-star chef carefully constructed merry-go-round in the middle of a plate delicately drizzled with some kind of oily, herby mixture, then it’s a ‘Confit Byaldi’, which is the very posh version created by French chef Michel Guerard.

Also, be careful of outrageous claims such as “The authentic Italian Ratatouille” recipe that I found. So scary, I didn’t dare click on the link, as I was afraid I’ll learn everything about “The authentic Bavarian pizza”, followed by “ The original Mexican beef Wellington”. Last but not least, I found a recipe that not only includes the beautiful Merry-go-round (the famous Tian…), but also includes potatoes… AND béchamel sauce, and it was still billed as an ‘original Ratatouille recipe.’

And now for the – really simple – recipe, and bear in mind that it’s a humble dish, probably invented to use up what were left of summer vegetables. Ratatouille is delicious on its own with some crusty bread to mop up the fragrant juices, but in France it is also often served at barbecues, as an accompaniment to the grilled meats and fish.